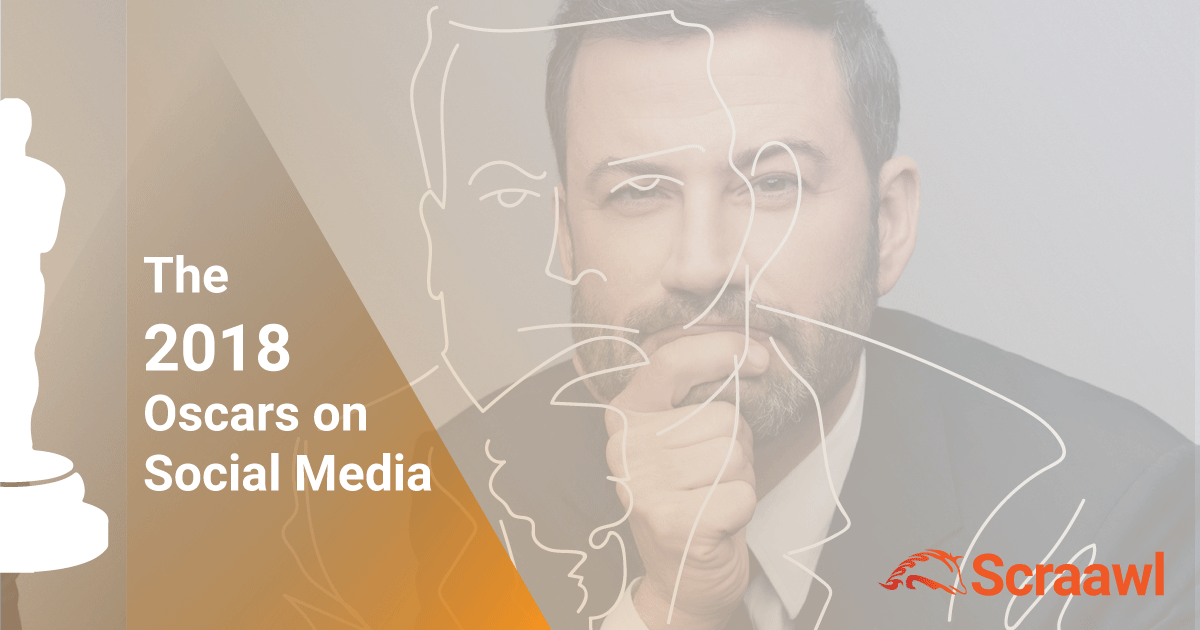 The ballots are in and the Oscars 2018 was a hit with diversity but a loss in ratings. Turns out this was the  worst year ever for the annual awards show. Some speculate that big TV events like the Oscars, such as the Grammys and the Super Bowl, are seeing lower ratings due to the variety of platforms through which viewers consume media. The question now is where should we go to understand audience consumption if they’re no longer tied to the big broadcast model of media? Scraawl’s take: go to social media.

We ran three large reports on the Oscars and the hashtag #oscars, collecting almost 300,000 tweets.

The first report collected tweets leading up to the event on March 4th. You can see a bit of the hubbub against the Oscars from some Twitter users who view the choice of Jimmy Kimmel as un-American in Top Words with “Anti”. The Top Mentions also include an account @jrcheneyjohn which popularized the “boycott” the Oscars conversation on Twitter.

Still by the start of the actual event, that anti-Oscars sentiment was less prevalent, perhaps being drowned out by the excitement around the nominations and the red carpet fashion. The second report collected tweets from the start of the Oscars telecast, and it shows groups like @variety and @theacademy as Top Mentions. We also see a Hashtags and Top Words with more expected terms like “oscars and #carpet.

Finally, the third report collected tweets during the Oscars. The Shape of Water, which won best picture, was one also one of the Top Hashtags.

In all three of the data sets, there was a surprising amount of international activity. There were accounts that had geo-tagged their tweets in places like Brazil and Chile and there were also a variety of languages represented in the tweets about the Oscars. In fact, in the third report, shown directly above, we see the Kanji symbols for the Academy as a top hash tagged term.

We were curious to see who or what made the biggest splash at the 2018 Oscars. We ran the analytic Named Entities one each of the reports to see who came out on top:

In each of the three reports around the Oscars, Jennifer Lawrence was always on the top list demonstrating her current dominance in Hollywood as one of the industry’s top actresses. Show host Jimmy Kimmel actually fell off the recognized entities list in the third report, perhaps not generating as much social media buzz as the show’s actual winners. A surprise hit on social media was actor Sam Rockwell. He won best supporting actor for his work in Three Billboards. In that same report of red carpet moments, Chadwick Boseman showed up just a few spots below Rockwell. Boseman has been seen on many red carpets promoting his blockbuster hit Black Panther.

Another surprise on social media was Rita Moren0, who wore the same dress to the Oscars in 1962. She looked just as fabulous and users on Twitter took notice. And as an added bonus, we saw the spoof images of Zootopia as best picture nominees like Shape of Water, make its rounds across Twitter, like this image from Scraawl’s Media Gallery:

In a pretty serious build up to the Oscars, marked with online boycotts, it was nice to see a Disney movie make light of the awards show and show levity.

Times are a changin’

But what’s the deal? Why aren’t audiences watching these award shows at same rate as past decades? From the afore mentioned article on the worst year at the Oscars:

Barry Frey, president of the Digital Place-based Advertising Association, which represents the billboard industry among others, said consumers no longer feel any urgency to watch and find out who won. They can get live updates on Twitter just as easily.

And guilty, as charged. Twitter makes is so easy to simply get the highlights of an event, most consumers these days prefer to watch clips or “snack” versions of the main event.

For next year, perhaps the Oscars will try a more social media oriented format. It’s clear there is an engaged audience, they just might be looking at the mobile screen in front of them and not the big TV in the living room.

Here’s a link to another awards show report: Golden Globes