Battle of the Gaming Brands: Who Won E3 by the Numbers 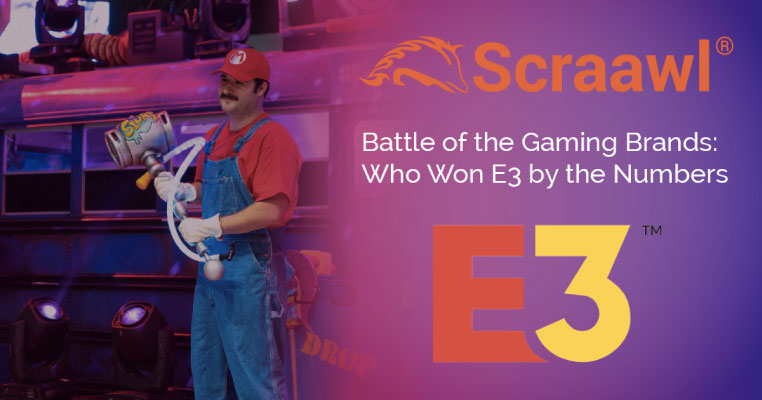 The Electronic Entertainment Expo, or E3, has been bringing game developers, influencers, and media professionals together for the largest annual event in the video game industry for over 20 years. This year over 68,000 attendees gathered at the Los Angeles Convention Center, for the E3 convention to see the newest technologies and releases in video games. Since 2015, E3 has also welcomed the public. This year the conference offered its largest number of public passes, opening the conference to 15,000 gamers. Furthermore, hordes of fans watched from home and took to social media to share their opinions of the conference, the exhibitors, and the newest games. With over 15 million posts across social media, E3 fans set a new high score for the conference’s visibility on social media.The Scraawl team ran 3 reports on the event to track the sentiments of fans and reveal who leveled up their brand at E3 2018.

The first report we ran was for the first day of E3 to determine which company made the best first impression of the conference. We evaluated the Day one performance on how each company ranked in Scraawl Basic Statistics Top Words, Top Hashtags, Top Mentions, and Sentiment Analysis advanced analytics.

Nintendo was one of the most used words on Day 1. With the release of the Nintendo Direct pre-recorded press release video in the morning of Day 1, conversations about Nintendo were prevalent on Twitter. The most covered game discussed in this release was Super Smash Bros. Ultimate, which will be the first Smash game on Nintendo’s newest console, the Switch. Square Enix, the makers of the wildly popular Kingdom Hearts games, was also discussed a lot on Day 1. Square Enix commanded attention online during Day 1 because of the increased publicity from their press conference the day before E3 began and the new Kingdom Hearts 3 game that was announced over the weekend. In the Top Words of our Day 1 Scraawl Report, the word “Sony” came in third place of all game development companies and seventh place overall.

For Day 1, the clear winner is Nintendo. As the Top Word of the day, a commanding presence in the Top Hashtags, and the highest overall positive Sentiment Analysis ranking, it is undeniable that Nintendo won the Day 1 competition on social media. Square Enix and Sony were the next strongest contenders on Day 1.

The second report we ran covered the last 2 days of the conference, and the rest of the week and weekend. We evaluated this report to determine which brands had the social media stamina to rank well across the entire event and in the reactions online that followed.

Sony was the highest ranking company across the week coming in as the fourth most used word, and the word Sony was only behind the words “Conference,” “E3,” and “Press.” This high usage may not be positive, however. Sony made a very controversial announcement about the increasingly popular Fortnite game. After Nintendo announced that it will be adding Fortnite to the Switch, Sony released a statement saying that they would not support cross-play of the Fortnite game with Nintendo Switch and Xbox One. This means that no account that has ever signed onto a PS4 to play Fortnite will be usable with the other consoles. This controversial decision goes against common practices among leading console manufactures, including Nintendo and Xbox, who encourage cross-play between consoles for an overall better gaming experience. Many PS4 Fortnite players have accused Sony of holding their accounts hostage and there have been large calls for the company to rescind this policy. After Sony, Xbox was the next highest ranked, coming in as the sixth most frequently used word of E3. Further down the list were Microsoft, Nintendo, Ubisoft, and Bethesda respectively.

There were 623 hashtags used to discuss the E3 conference. Rage 2, Bethesda’s newly announced sequel to the game, Rage, is slated for release in June of 2019. One of the voice actors from Rage 2, Andrew W.K., made an appearance at the Bethesda booth, and brought significant attention to Rage 2 and Bethesda by using the hashtags #rage2 and #E3. Ubisoft also gained publicity under the hashtag #ubie3. Many of the Tweets associated with #ubie3 are recaps and opinions of the Ubisoft press conference that took place before E3 began.

Sony’s sentiment analysis was 60% positive, 15% negative, and 25% neutral. Xbox had an even higher positive sentiment and a lower negative sentiment, with 65% positive, 10% negative, and 25% neutral. With the Fortnite controversy, it makes sense that there would be a large discussion about Sony on social media and that the tone of the conversation would not be as positive the competitors. As an underdog competitor, Bethesda rallied an impressive 79% positive, 7% negative and 14% neutral sentiment.

Although Sony won on Top Word usage, Xbox was still ranked well in Top Words and had a better overall sentiment rating. Both Sony and Xbox lost to Bethesda on sentiment, however. Sony and Xbox also lost to Bethesda on Top Hashtags and Top Mentions. Although the word Bethesda was not as prominent in the overall conversation as Sony or Xbox, Bethesda’s Twitter account was mentioned more than any other developer’s. A large percentage of the conversation was also positive. Bethesda undeniably won the Level 2 E3 competition.

We ran our third and final report the Monday after E3 concluded to determine which brands had left a lasting impact on consumers and to determine who “won” the E3 conference. Our first step was to filter out the noise from our report. We chose to remove the Top Word “Microsoft,” because an evaluation of the raw data for that term showed that most of the conversation was not focused on video games or E3.

When we evaluated the terms of our report, after removing extraneous noise from our report, we found that Nintendo was the second most frequently used word, followed by Xbox and Sony. All of these words occurred in the top 5 most frequent words found in our Top Words search.

The top 5 mentions of E3 were @youtube, @xbox, @sony, @zsarsalad, and @nintendo. YouTube, as one of the primary streaming sources of E3, was the most prevalent mention of the week with 2.5% of the mentions. Xbox commanded 1.5% of the total mentions, and Sony secured 1.3%. An artist under the name of @zsarsalad created a Super Smash Bros. comic strip that received 3.5 thousand retweets and earned 1.1% of all mentions during E3. @playstation and @ubisoft were the next most mentioned accounts.

The entire sentiment for E3 was 54% positive, 16% negative, and 29% neutral. To determine who won E3 overall, we evaluated who came out first in each level for Top Words, Top Hashtags, Top Mentions, Sentiment Analysis, and Level Winner. Tied for third place, Sony and Xbox each won a single round. In second place, Bethesda won 4 rounds. Bethesda is the only company on our podium who does not manufacture gaming consoles. Bethesda is also a much smaller company that Nintendo, Xbox, and Sony, making its high performance even more substantial. In first place, Nintendo won 8 rounds, and is the overall winner of the competition. 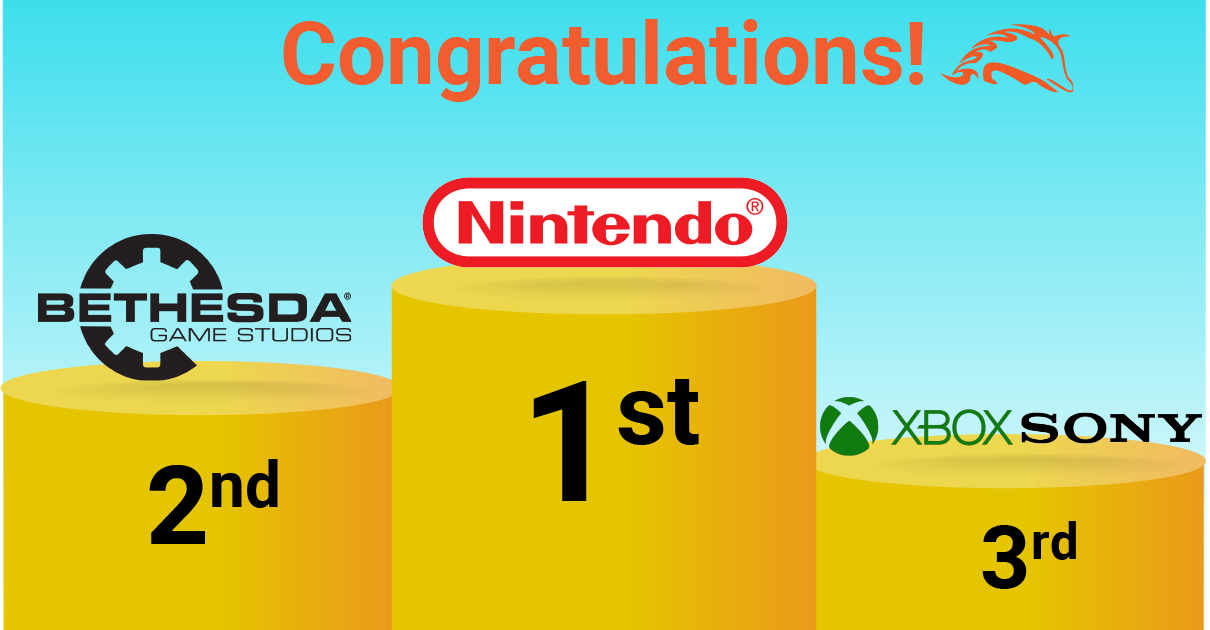