McDonald’s is Flipping its Arches for International Women’s Day. Here’s What Twitter Had to Say. 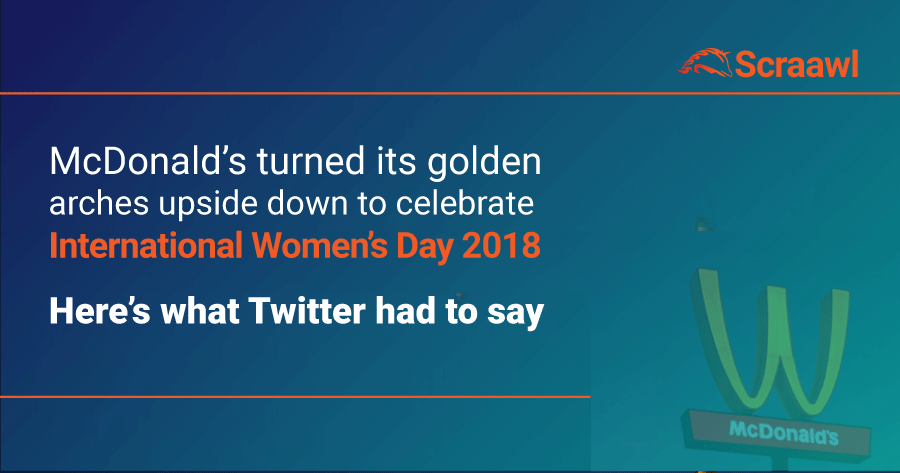 Wow, it is hard to be McDonald’s sometimes. Either you’re getting roasted by Wendy’s on #NationalFrozenFoodDay or you’re well-intentioned gesture for International Women’s Day receives mixed results.

McDonalds announced it was going to turn it’s iconic golden arches upside to down, turning the M into a W, to commemorate International Women day. They shared this news with heart-felt video on Twitter.

Today, we flip our Golden Arches to celebrate the women who have chosen McDonald’s to be a part of their story, like the Williams family. In the U.S. we’re proud to share that 6 out of 10 restaurant managers are women. https://t.co/6z88OhjXpO pic.twitter.com/hXfOi3wWQf

McDonald’s bid for corporate responsibility reflects a current trend in marketing of brands taking value stances. Whether it’s a Chevy commercial with the voice of Dr. Martin Luther King or a Budweiser ad that tells the story of its immigrant founder– brands that show up for causes, stand out.

To measure the impact of this campaign initated by McDonald’s head of diversity, I ran a social listening Twitter report on the terms (mcdonalds international womens day OR mcdonalds iwd OR mcdonalds arches).

I collected over 35,000 tweets that matched these terms. When I took a peek in Raw Data, I found a few tweets that made us chuckle. Of course, there would be social media jokes with a corporation as big as McDonald’s. Here were some of our favorite responses:

McDonalds is flipping one of their signs to celebrate International Women’s Day, which is cool! but as a bonus now they can sue every anime ever made pic.twitter.com/ag54a772tl

But joking aside, let’s take a look at the report’s results. In Basic Statistics I was surprised to find more a mentions to an account named @truebe than to McDonald’s Twitter profile, by magnitudes more.

McDonalds: In celebration of women we are flipping the arches upside down.

Or you could give your employees better benefits.

Maybe a living wage? Better family leave? A career path forward in the face of automation?

McD: The W stands for women.

Hear me out: what corporations and brands must never forget, is when you express your values you encourage dialogue with your audience. This should be expected behavior now, especially given the multi-directional flow of conversation between brands and their audiences online.

If McDonald’s responds to this viral tweet in a thoughtful manner, it could begin to turn the tide for its brand image. These comments, or the mass support for the comment above, should not be ignored. Unfortunately and fortunately, it is not possible to dismiss outcries in these days of social media. These retweets are actually indicative of the values of the customers with which McDonalds is trying once again to find alignment. Therefore, McDonald’s should give it some consideration and let its audiences know that as a company they are amenable to feedback. McDonald’s has been trying to change for decades to keep up with new consumer habits, this may be where they should start.

So I applaud McDonalds for not only celebrating women, but for jumping into the fray. Now fingers crossed they listen to what the consumers have to say or at least, respond thoughtfully and with transparency.