Perception vs. Reality: Finding the Truth Behind the Touching Reunion of Artists Marina & Ulay 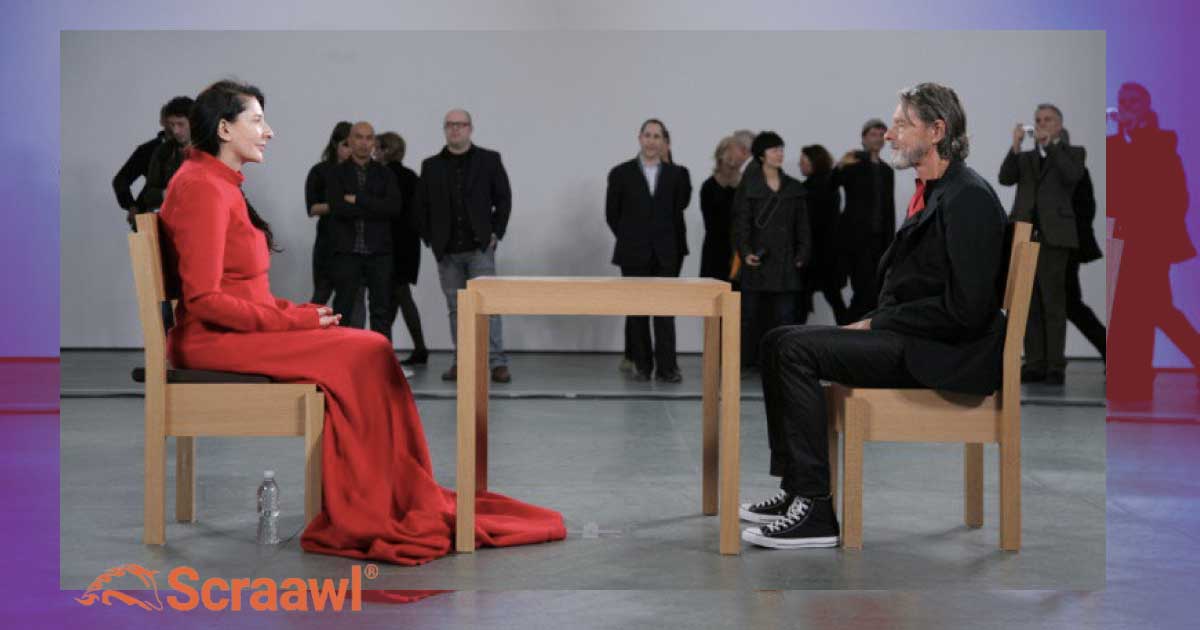 Guest author Anu Hasan reflects on the impulse to share on social media and how a healthy dose of skepticism may be what we need to see the whole picture.

While there is nothing wrong with these kinds of small pleasures, it does raise the question – where is this constant lust for attention taking us? And more importantly, are we being responsible in the way we undertake this quest?

I recently saw a rather disturbing picture shared by someone on my Facebook timeline warning parents about kidnappers being at large in Tamil Nadu, a state in Southern India. But it turns out that the pictures were not from Tamil Nadu at all.

It was odd; no one questioned the veracity of the content. In their haste to interact with important posts that get likes, people had jumped in to share this post without checking if it was true.

There was one comment, somewhere in the babble of voices, that plaintively cried out that the Facebook post was wrong, but this lone voice was drowned out by righteous indignation and misdirected anger at non-existent kidnappers.

A Touching Reunion or Fake News?

In another instance, a friend of mine recently shared a video – admittedly a rather moving one, of the reunion of the great performance artist Marina Abramovíc and her ex-partner Ulay. This was during one of Abramovíc’s sensational art projects in 2010 when Ms. Abramovíc would share a minute of silence with a complete stranger. Unbeknownst to her, her ex-lover and partner comes and sits opposite her and what follows is a flood of tears, beautiful expressions, and hand holding.

New York times covered the whole encounter in the article below:

But this was a video from 8 years ago.

I originally saw this video of the two artist on Facebook, and when I used Scraawl, I wanted to run a report to see how the clip fared on Twitter- how many people had tweeted and retweeted since 2016 about this 2010 video.

In Twitter, I found that 138 users had shared the post. Not a large number but the report did direct me to the video itself on Youtube and I realized that this video now has 15 million plus views.

Diving Deeper into the Social Media Data with Scraawl

Using the search expression: “Marina Abramovic e Ulay – MoMA 2010” I went to Scraawl to collect past posts from September 1st, 2012 to October 19th on Twitter. 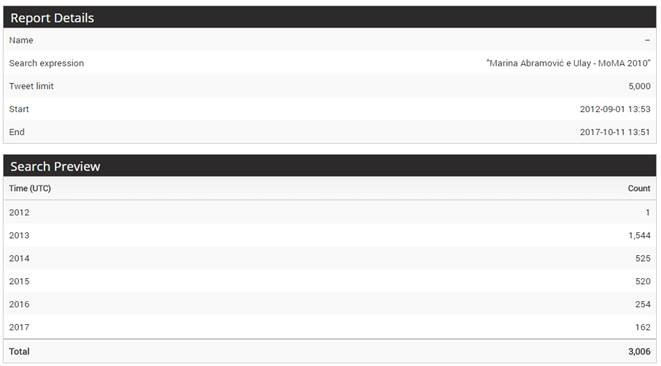 The preview search showed 3,000 tweets. What’s useful here is that its popularity seemed to peak in 2013 which points to when the video went viral.

Going wider with a more general search, this time (Ulay AND Marina). (Luckily Ulay is enough of a unique name that it wouldn’t be confused with any other person.) I found that there were over 32,000 tweets about the two artists. 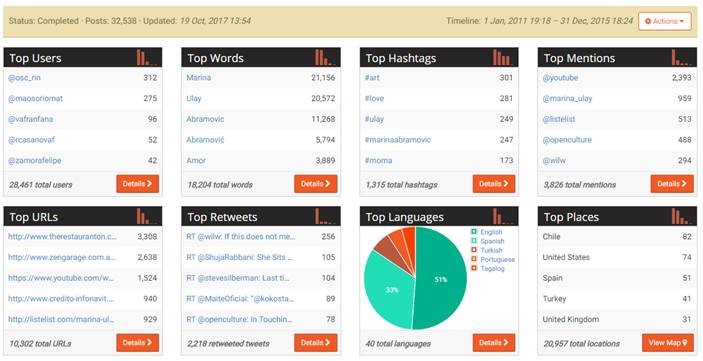 I collected these posts and saw that mentions of the two peaked in January 2013, a few months after the video of their encounter was put up in October 2013.

Amazing! I thought to myself and decided to find out what happened to this wonderful love story. And as I trawled through search engines, a rather sad if not unsurprising pattern emerged.

Beyond the Surface Level Reunion

Delving a bit more, I discovered that their last project together – the much talked about walk across the Great wall of China to meet in between to say goodbye – was fraught with tension. With elements of resentment and incidents of infidelity (both confessed and discovered), a slightly different and less romantic picture emerges. Ulay was now suing Marina. And the courts awarded him a 250,000 USD payout. The reason? It appears that Marina had not paid Ulay his share of the profits from the sale/exhibition of their joint art projects despite having a contract.

Then I went into Raw Data within Scraawl and searched for the exact phrase “Ulay sues Marina” within the collected posts. Out of all the tweets, only 133 were about Ulay suing Marina and most peaked in November of 2015. There were perhaps more in other languages that I might have missed, but still a stark difference in numbers.

I went back to my friend’s post on Facebook and noticed that since the last time I had been, more people had liked it – simply on the face of that video – something that captured a moment in isolation, blurring out the reality before and the bitterness after.

I wondered if I should break their hearts by telling them the truth but kindness prevailed. Unlike the previous disturbing post, this one only served to communicate that love could be beautiful. There really was no direct harm being done. A few oohs and aahs never hurt anyone. And so, I decided to enlighten said friend in a private message. Her rather blithe “oops” served to reinforce my opinion of shared social media posts.

But I had to admit, you cannot change another person unless they were willing to change. I suppose the least I could do was to not join the band wagon of attention seekers and spread fake news.

Anu Hasan is an actor, TV presenter, published author, and entrepreneur. Her body of work as an actor and TV presenter spans six languages and two countries. She has been a regular columnist for the magazine JFW for the past ten years. Her first book, Sunny Side Up, was published by Harper Collins (India) and been well received. She currently runs AH Positive, a media and marketing consultancy company that she founded. She holds a Masters in Physics and a Masters in Management from BITS Pilani, India. Anu can be reached at ahpositive.uk@gmail.com and on Twitter at @AnuHasan01 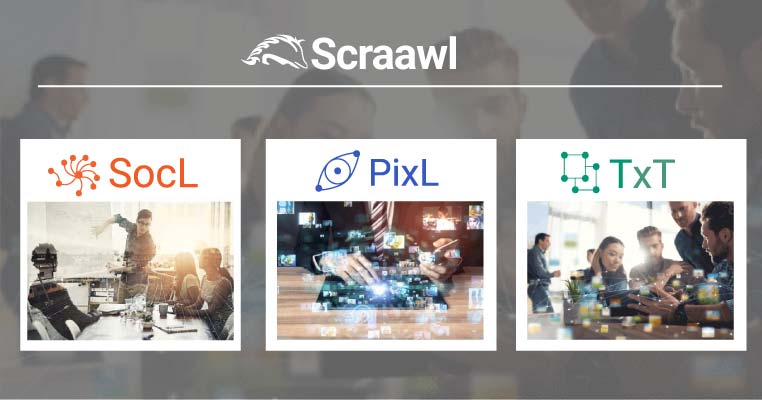