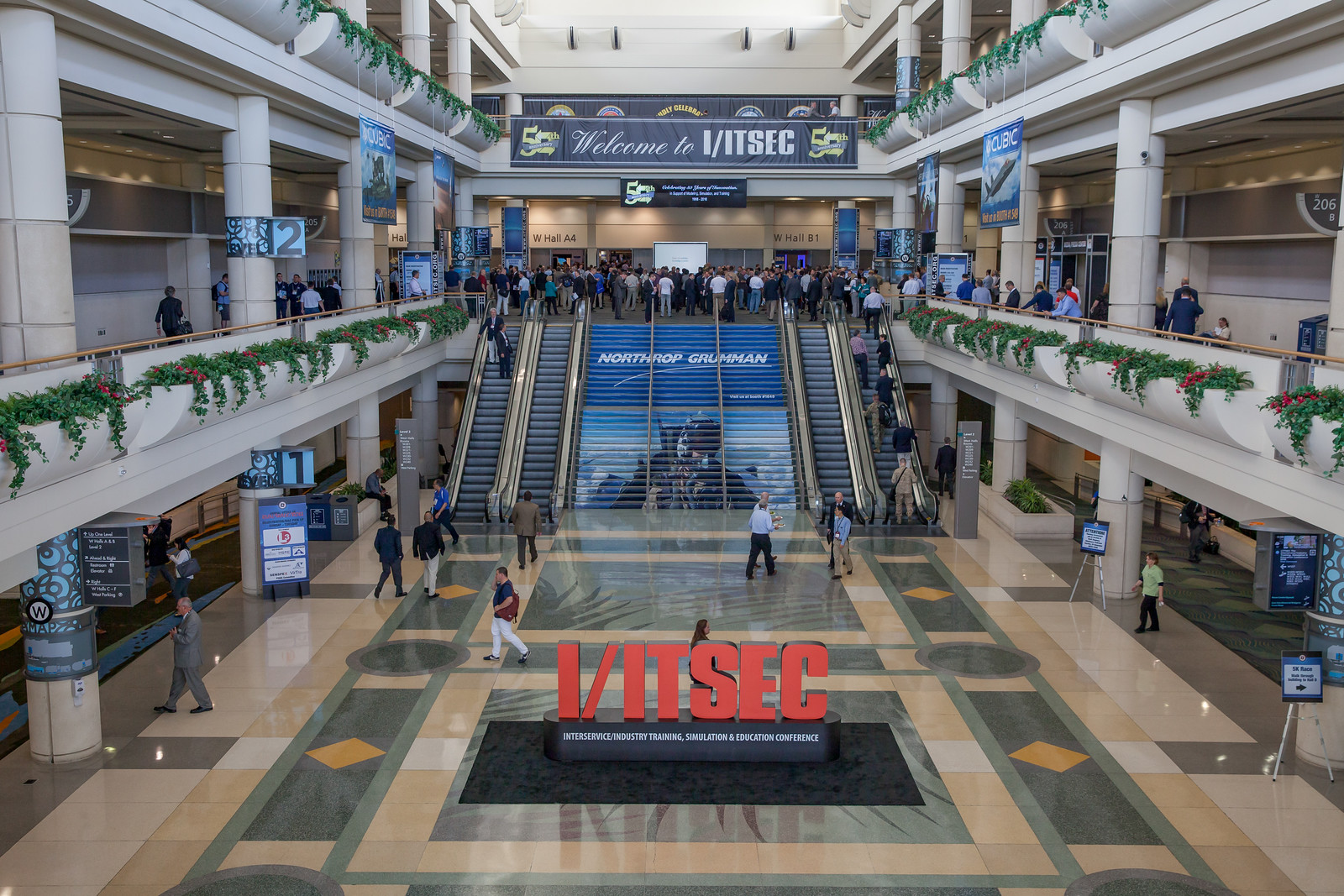 As the conference kicked into full gear at the Convention Center, a simultaneous event was also taking place online as attendees, exhibitors, and presenters live-tweeted updates on the show floor and in the tutorial and paper sessions.

This digital echo chamber of I/ITSEC conversations can provide insight in to what topics had the most impact within the community; especially helpful information as the I/ITSEC team begins planning for 2017.

Using Scraawl (@Scraawl), we collected all tweets mentioning #IITSEC from Friday November 25th through Monday December 5th to capture conversations leading up to the event, during the event itself, and in the few days following. 3,808 total tweets were collected. The public report can be found here.

The timeline of activity clearly mirrors the rise and fall of event participation:

The tweets collected represent a complex landscape of interactions between different users and hashtags. The Social Graph below was constructed in Scraawl by connecting all the entities that interacted through mentions, retweets, and hashtag uses. This is just the tip of the iceberg. Luckily, Scraawl provides a host of statistics and analytics to help us make sense of the data.

First, let’s take a look at the event as a whole. The international participation at I/ITSEC is reflected in Scraawl’s map of the 2,270 geo-profiled tweets (the user’s Twitter profile includes a geographic location).

ITSEC has an expansive scope in both topic depth and breadth, so it’s easier to look at the data in segments to gain a better understanding of the trends in the Twitter conversations. We divided the dataset into four separate reports to look at the conversations from each day separately.

The Top Users rankings shift from day to day, but we see a clear popularity of media entities like @bschlenker, @miltech1 (who even beats out @iitsec on Wednesday), and the Shephard Media team (@shephardnews @tonymskinne & @defenceviper). Big defense contractors like @cubicdefense and @cae_defence also have a clear presence. By the last day, I/ITSEC attendees @drjenmurphy and @saeschatz cut their way through the news and marketing chatter.

The Top Words remain relatively constant throughout the week, clearly showing that I/ITSEC conversations are in line with the conference themes of training, simulation, learning, and technology.

Top Hashtags show quite a bit more variability as companies promote products for various platforms and their Tweets get retweeted by the community.

Top Mentions are mostly dominated by defense contractors (@boeingdefense, @cubicdefense, @cae_defence, @lockheedmartin) and news media (@shephardnews, @gunshipgirl), but @Aptima moves to the top of the list on Tuesday. This is undoubtedly because of the inspirational words from Aptima CEO Daniel Serfaty and the 2016 I/ITSEC conference chair Janet Spruill during the opening ceremonies.

People say that a picture is worth a thousand words – maybe that’s why so many people include images to supplement their 140-character Tweets. The Media Gallery in Scraawl’s Advanced Analytics provides a visual summary of the trends at I/ITSEC.

As conversations take place, some users interact with other users more, forming groups of sub-interactions that become a community within the larger conversation. Scraawl makes it easy to examine these communities.

On Monday (and in fact every day) the largest community was defined primarily by the use of the conference hashtag (#iitsec) and mentions of @iitsec. Other communities emerged as well including:

When analyzing social media conversations, it is important to not only consider the number of tweets a user has (as reflected in the Top User list) but also the user’s connections to other users and hashtags through mentions and retweets.  Together these factors impact the user’s influence in the overall conversation. On Monday and Tuesday, @iitsec held the spot for top influence with its live conference updates and the many retweets from attendees. By Wednesday and Thursday, @boeingdefense and @lockheedmartin moved up in the ranks with their promotional tweets and huge follower base who retweeted and mentioned them throughout the conference.

Analysis of the conversations on Twitter helped us to not only understand WHAT people were talking about at I/ITSEC, but also WHO was talking and having the greatest influence on the rest of the community.

As we’ve seen, the #iitsec conversations were dominated by news agencies and big defense companies – and they were primarily focused on the activities happening on the exhibit floor. Too bad there wasn’t a separate hashtag used for the tutorials and paper sessions so we could see what topics trended there.  Maybe next year!

We invite you to explore Scraawl’s advanced analytics for yourself!  Sign up for your free Scraawl account to get started.